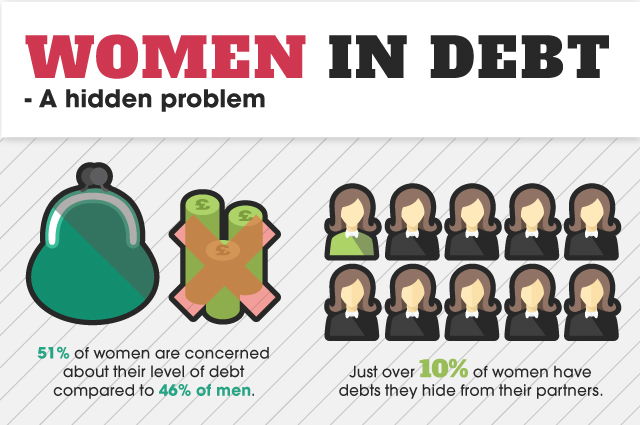 There are vastly different behavioural patterns between men and women when it comes to personal debt. Men and women are still treated differently in many ways, despite 30-plus years of progressive law making, but two thirds of women across the UK now find themselves indebted.

Our infographic takes a look at women in debt and sheds some light on this hidden problem.

The Insolvency Service’s gender and regional personal insolvency statistics for England and Wales in 2014 showed, for the first time, that women are more likely to become insolvent than men. Woman between the ages of 18-44 showed a greater likelihood to enter an Individual Voluntary Arrangement (IVA) than their male counterparts.

According to R3 research, based on the cases they see, 85% of Insolvency Practitioners say consumer debt issues are a major cause of insolvency for females, while only 75% say the same for men.

Debt Relief Orders (DRO) were also more common amongst women than men across all regions and age groups. Men, however, still top the bankruptcy tables.  The introduction of the DRO in 2009 partly explains the difference between genders. It is a debt solution for people with under £15,000 worth of debt, a low income and barely any disposable income – sadly it is likely that more women than men fall into this category, purely because incomes are not yet equal between the genders.

A difference in earning potential between the two sexes is certainly a contributing factor. 40 years after the Equal Pay Act came into force, UK women continue to face a stark gap in their earnings compared to men, and experience one of the highest pay gaps in the EU.

Women in the UK still do the bulk of unpaid care for children and elderly or sick relatives, therefore many women take on part-time roles in order to balance work around their caring commitments. Almost three-quarters (74%) of part-time workers in the UK are women.

Debt and the hidden problem

Debt has become even more difficult to talk about and like most problems, the more it is ignored the more it escalates. Women tend to find it easier to open up about problems, which could suggest they are more than likely to be honest and upfront about financial issues.

However, 10% of women have debts they hide from their partners. Serious debt can go much further than just hitting bank balances, especially for women. For instance, female students with debt issues are more likely to have an eating disorder than those without financial issues.

It is also evident that women are 20-40% more likely to suffer from a psychological disorder than men, with financial pressure a regular contributor.

Inability to pay bills was second highest concern for women in a political survey carried out by Lodestone last year. 51% of women surveyed were concerned about their level of debt compared to 46% of men.

Who deals with the household budgeting could also impact on these results, with more women tending to take up the responsibility of this role, making them more aware of the situation.

Pressure from children to spend more than we have is bad enough, but women are under increasing pressure from the media to have the celebrity look and buy possessions they simply cannot afford.

Are women victims to frivolous spending? Is the pay gap between men and women relative in the difficulties in overcoming debt for women? Or is the reality that women are simply more responsible than men in dealing with debt sooner?

Britain’s personal debt and what the General Election could bringWage Equality: Are women still getting a raw deal?