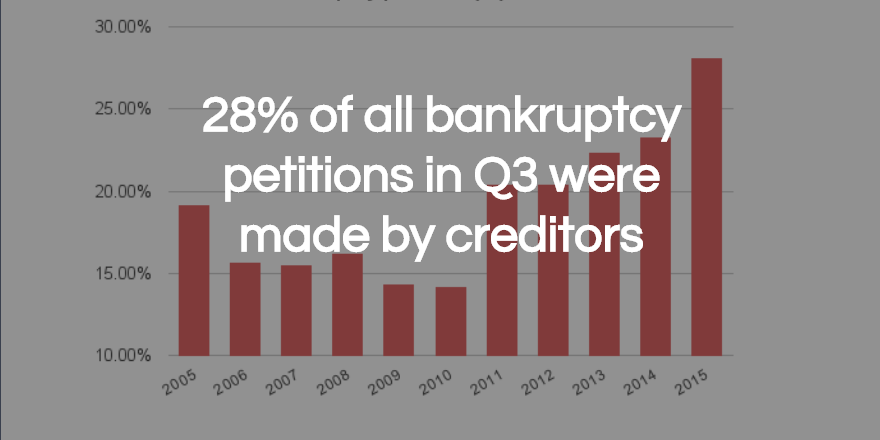 Quarterly figures released today by the Government’s Insolvency Service show that total personal insolvencies rose in the third quarter of 2015, for the first time since the second quarter of 2014.

That increase is entirely due to rising numbers of Individual Voluntary Arrangements (IVAs). The other two formal insolvency procedures (Debt Relief Orders (DROs) and bankruptcies) continued to decline.

Unnoticed by many, there also appears to be a significant long-term increase in the numbers of people forced into bankruptcy by their creditors. Ten years ago less than one in five bankruptcies were petitioned by creditors. In the last quarter this had risen to between one in four and one in three.

IVAs: why the rise?

IVA numbers have fallen so far and fast over the last year, some ‘bounce’ up is not unexpected.

So why the continued fall in bankruptcies and DROs? ClearDebt believes that there are clear reasons for the rise in IVAs and thinks this will continue.

Firstly, IVAs are more accessible and regularly arranged for people with much lower levels of income and debt than a few years ago.

This coincides with a massive rise in the number of people who say their main debt problem is council tax or rent arrears and a decline in the proportion of people who blame credit cards or loans for their debt problems.

Council tax debtors generally have lower incomes and debts than people struggling with consumer credit loans – so access to IVAs at lower contribution levels may well be a factor.

Very aggressive collection practices by local authorities, who frequently use bailiffs, is also fuelling a rise in IVA enquiries from people with council tax problems.

Then, the tough regulatory environment introduced by the FCA is clearly having an effect.

The supply of debt management plans is clearly contracting, even before FCA force people to exit the market, and some of this gap is being made up by an increasing number of IVAs arranged and supervised by professionals who have been well regulated since 1986.

ClearDebt believes both of these factors will lead to IVAs continuing to take a larger proportion of personal insolvencies for the next few quarters at least.

As the realisation dawns that, for most debtors, a realistic IVA is likely to cost people less and eliminate debt far more quickly than even a free debt management plan these figures could increase further.

Personal insolvency figures in England and Wales were mirrored by those for Scotland, where bankruptcies and Debt Arrangement Schemes (DAS) continued to drop and the Scottish IVA equivalent, the Protected Trust Deed (PTD), shot up.

Are creditors getting tougher?

Not surprising, many would think, since the conventional wisdom is that creditors rarely get a decent return from bankruptcy and consider it in only exceptional cases.

However, since Q3 2010 there has been an inexorable rise in the proportion of bankruptcies started by creditors. Between Q3 2010 and the same time the following year they rose by nearly a third.

By Q3 2014 creditor petitions were 23% of all bankruptcies and in today’s statistics, they have risen to 28%.

Is bankruptcy becoming a more effective recovery tool for creditors?

Possibly. What is certain is that bankruptcies continue to decline in number (a drop of roughly 70% between 2010 and 2015), so it’s likely that bankruptcies are now more likely to represent hard and unusual cases than they did before and that may just mean that there are a higher proportion where it is worth creditors taking this drastic action.

The especially sharp rise in creditor petitions isn’t surprising. The debt level people have to owe a single creditor before the creditor can start bankruptcy proceedings has just risen from £750 to £5,000. This spurt may be due to creditors taking last-minute advantage of the old rules.

Personal insolvencies are at a 10 year low but DROs are on the riseIs this the end for bankruptcy?