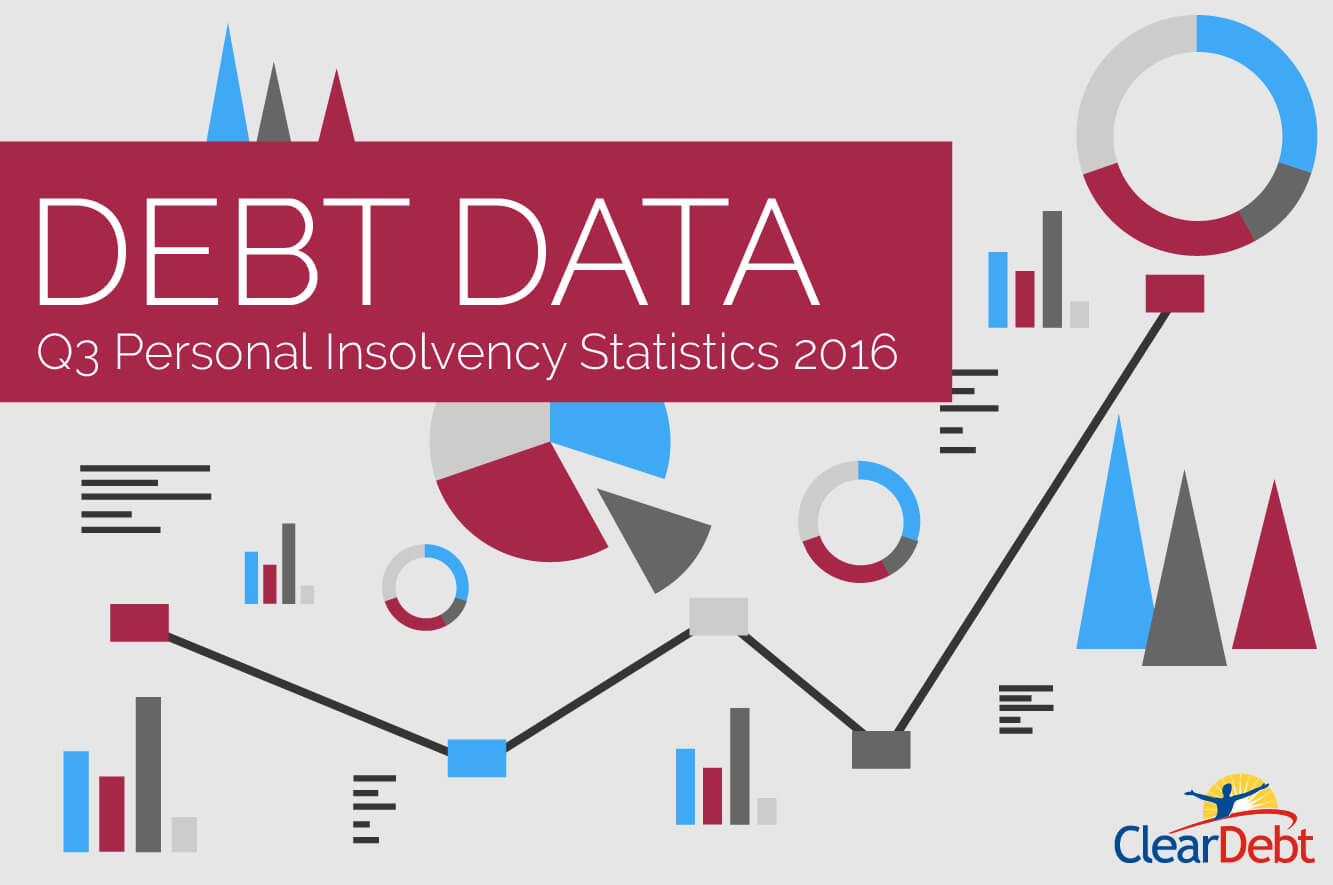 Today’s figures from the Insolvency Service show Individual Voluntary Arrangements (IVAs) rocketing away as the most used formal debt solution in England and Wales. And, driven by IVAs, the number of people choosing to deal with their debt through personal insolvency is really on the up! Why?

Our predictions of three months ago are clearly coming true. Take a look at the chart. 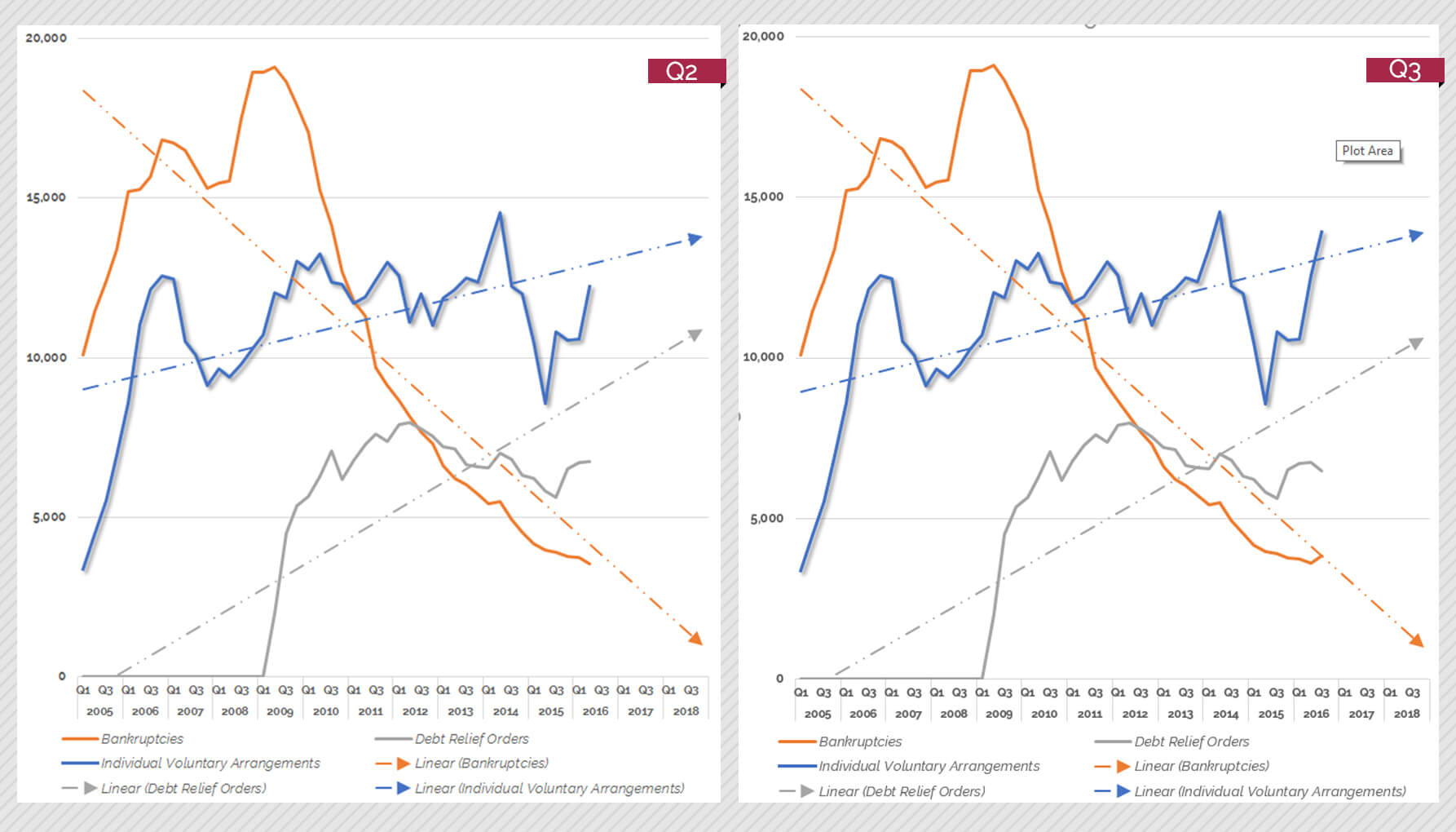 It’s not the economy, stupid!

It’s counter-intuitive. Our economy is doing pretty well and most people are in work. So, why do today’s figures show that the number of people going bust in 2016 is set to be higher than in 2015 and 2014? It could be that more and more people are turning to IVAs rather than informal debt management plans (DMP).

In our view, this isn’t only because the great British public has realised how an IVA, with its freeze on interest and charges and debt forgiveness built in (see the full facts about IVAs here) can be better than the DMP so many have used until now.

We also think firms that used to sell and operate fee-charging DMPs are being put under tough regulatory pressure by the Financial Conduct Authority (FCA). So, they are now choosing to recommend IVAs first, which is something they should, for many people, have done all along.

We don’t think this raises much of a risk of mis-selling.  Insolvency Practitioners are well regulated and will assess each case carefully when it is passed to them. But it is a tragedy that many have been sold a longer, more costly DMP when an IVA would have been better. This is even true of free debt management plans, often offered by charities.

People should really check out whether these will put them under the burden of repaying debt for longer and whether the total repayments will be more. In fact, often both will be considerably longer and more costly.

The way IVAs work (assessing what you can afford to pay, stopping interest and giving you the right, if you make all the payments, to write off the amount you cannot afford, usually over five years) means you normally pay considerably less toward your debt each month than you do whilst still struggling on.

Our IVA calculator can give you, quickly, an idea of what your monthly saving could be.

We think these Insolvency Service figures show that DMPs are becoming a less and less important part of the debt solutions mix. IVAs are undoubtedly in the driving seat of the increase in personal insolvencies, but changes in the other procedures have had an effect too. Debt Relief Orders (DROs) are dropping

Debt Relief Orders (DROs) are dropping slightly quarter on quarter. This could also be due to the influence of IVAs. Many providers now offer IVAs at contribution levels that are only just above those needed for a DRO. This is a tricky issue. We can’t think of many cases where, if a DRO was possible, that an IVA would be better. Therefore, it’s vital that the disposable income assessment is done carefully.

However, year on year, there are many more DROs than there were (more than 15% higher), largely because DRO eligibility criteria changed a year ago. So, there is a good chance the right people are getting access to this important procedure.

The number of people choosing to make themselves bankrupt has also shot up (by 12%). We think this reflects the successful introduction of online applications.

We still think bankruptcy will continue it’s long, slow decline to virtual extinction but, who knows? The move to online could reduce stigma and see more people taking it up.

Why ClearDebt’s IVA Calculator really can show you how much less you could pay in an IVAWhat ClearDebt Millennials think about financial education: FinCap Week